Weekend for me shouts for a visit to my kitchen, but not always do I get the time to cook up an elaborate recipe. Sometimes it’s better to cook a dish that is simple to make, is comforting and of course, is delicious.

Hence, last Sunday when my cravings for pasta were at an all-time high, and I didn’t have the time to do something fancy, I made my version of the beloved spaghetti with meatballs, and that too in a single pan.

Yes. I did cheat on the recipe by replacing meatballs with chopped sausages and I did make a faux pas by breaking the spaghetti in half, but then the cooking was fuss-free and the end result was delicious! 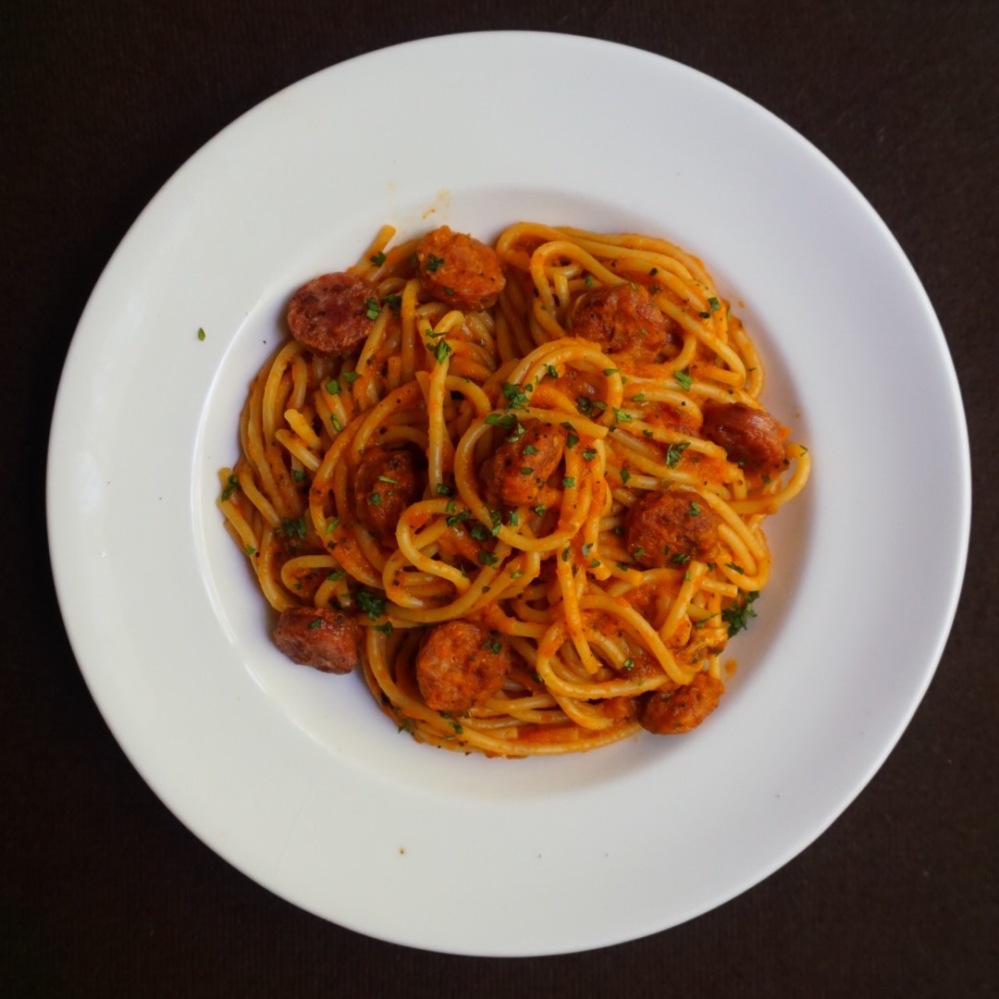 Know about my one pan spaghetti recipe below:

Olive oil: 2 tsps
3-4 Sausages(You may choose whichever one you like, however, I used bacon and cheese sausages): Chopped
Spaghetti:180 gms
2 cups of water
Garlic: 2 pcs. Roughly chopped
1 onion: finely chopped(simply blitz it in the mixer for a few seconds to save time)
Smoked paprika: 1/2 tsp(Replace with Kashmiri red chilli powder if not available)
4 tomatoes: pureed
Dried oregano(Use fresh, if available)
Salt to taste

1. Take a pan and add olive oil to it. Let it heat and then throw in the sausages.
2. After the sausages start to brown a little, add the roughly chopped garlic and cook till garlic goes brown and the sausages get a little crisp and brown.
3. Remove the sausages from the pan and place them in a container (Make sure that you do not remove the oil from the pan as it would have the garlic flavour infused and the fat from the sausages)
4. Add the pureed onion along with salt. This will help it to cook faster. After the onion starts to brown a little, add paprika and tomato puree.
5. Let it cook, till the sauce gets reduced to half. After which, simply break the spaghetti in half and put it in the pan along with 2-3 cups of water.
6. Allow the spaghetti to cook in the pan for 10-13 minutes. If the sauce gets very dry, simply add more water (Since the starch from the pasta remains in the sauce, it’ll be a nice and juicy spaghetti).
8. Once the spaghetti is cooked, simply put in the sausages that were sauteed along with oregano and mix them well with the spaghetti.
9. Sprinkle some parmesan cheese if you please, or devour as it is!